If you are reading this page you likely know someone with EoE and you want to get to the facts quickly.  As such, I will keep my editorializing to a minimum and only add in personal stories where I think they will be helpful.

Eosinophilic Esophagitis (pronounced ee-uh-sin-uh-fil-ik  e-sof-uh-git-is ) is a an allergic reaction that causes the throat to scar.  It is often triggered by eating food

I was diagnosed with EoE the first time I was scoped for Celiac a few months ago.  At first I was pretty scared about it but then the surgeon told me mine was closer to my stomach than my head so it was less dangerous and that it also might be in remission.  Regardless, I had to learn about it and here is what I have found.

Eosinophils are white blood cells that fights infections.  They are also related to cells going out of control and causing cancer and allergies.  It is said that there is an “Eosinophils Disorder” when you:

My surgeon said it was mostly found in males and while it is more frequently diagnosed in children, it is often diagnosed in adults too.

It can be but there is little research to make a definitive statement either way.

5: EoE is not uncommon in Celiac’s:

My surgeon told me about half the kids she scoped for Celiac in the last few weeks had EoE but she also said that was an unusually high rate from her 8 years of experience with it.

Yes, it was first described in the 1980’s and unlike many diseases that are thought to have simply been undiagnosed throughout history, we are sure this is in fact a new disease.

Claims from various interest groups and advocates claim it is caused by everything from Genetically Modified Crops (highly unlikely) to air pollution.  Sadly the truth is, as of 2019, there is little hard research on EoE and we just don’t know what causes it yet. 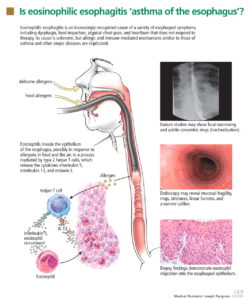 8: What are the Common Symptoms of EoE?

It is believed that most people with EoE go undiagnosed but of those who do get diagnosed they claim that they feel something is “caught in their throat”.  My surgeon said that often boys are brought to the hospital saying that they feel like there is a chunk of (fill in the blank, but often steak) caught in their throat… and there is.  Beyond that the symptoms include:

9: What are the Common Treatments for EoE?

Unfortunately there is very little research into EoE but my doctors tell me that because it is becoming much more prevalent:

Today less than half of patients the use Gastroesophageal Reflux (acid reflux) medications either control their EoE or put it into remission.  Less than half sounds like a bad thing, but that means about half of the people with EoE have an easy fix that does not have significant lifestyle changes.  I now take an over-the-counter acid reflux medication before meals and will get scoped again in 6 months to see if it has helped me.  It is important to note that this disease is not a derivative of acid reflux (we don’t think!); it is simply that the medication often helps those with EoE.

If it turns out that my EoE is still progressing, even though I am off wheat grains and am taking this medication, I will have a choice between taking a more serious prescription acid reflux medication, steroids and going on a much more restricted diet.  My surgeon told me that of those that need further treatment, the solution is to cut out an average of 4 of the following 6 likely allergens: Wheat, Milk., Eggs, Nuts, Soy, and Seafood.

For more details on how the diet testing works, skim through THIS EoE short document.  If you want to make yourself feel better about what you can eat with full blown EoE see this Pinterest page.

The future for those with EoE is quite bright.  It is very rare that someone with EoE cannot control it with common medications and reasonable dietary restrictions.

There are clinical trials going on right now that focus on medications that target signals for eosinophils to grow.  We expect more trials and successes in the not too distant future.

Because this disease is becoming more common there are also support groups and lobby groups forming all over the globe.  We you can see our links page for more, but one of the largest groups you should be aware of is American Partnership for Eosinophilic Disorders (aka APFED).

I have been taking Sandoz-Lansoprazole since a few weeks after my first endoscopy. I’ve never had to take pills on a regular basis, so this was a first. In the beginning, I didn’t think it Read more…