Cystic Fibrosis (CF) is not an autoimmune disease like Celiac Disease but it does have definite automatic responses and the two have some other surprising links.

It turns out that people with CF are three times more likely than those in the general population to have Celiac Disease.  That link intrigued Italian university researchers Luigi Maiuri and Valeria Raia along with Guido Kroemer, from France’s Descartes University.

CFTR (Cystic Fibrosis Transmembrane conductance Regulator) is the protein that causes mucus to change from fluid to a sticky substance.  Defective CFTR causes those with Cystic Fibrosis to have thick layer of mucus build up in their lungs and intestines with fatal consequences.  Today, there is no cure for CF but there is lots of research into it.  One of the compounds used to treat CF symptoms is called VX-770 which helps CFTR function normally.

In their initial research the team found that live gluten-sensitive mice given VX-770 responded with substantially reduced intestinal problems.  They then retested with live human cells taken from six people with celiac disease and found that VX-770 blocked the immune response.  In other words VX-770 stopped the celiac disease response. 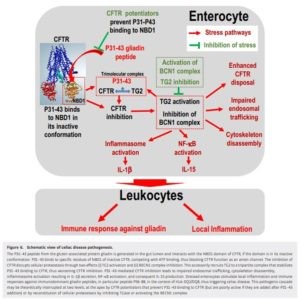 In medical terms, the researchers summed up the results this way:

In conclusion, this study identifies CFTR as a molecular target of gluten that contributes to CD pathogenesis, providing the scientific rationale for repurposing CFTR potentiators for the prevention or treatment of CD. Future clinical trials must explore whether oral administration of CFTR potentiators, possibly in galenic formulations that render them bioavailable after gastric passage, may be capable to interfere with CD pathogenesis and to allow celiac individuals to avoid autoimmune comorbidities without changing their diet.
SOURCE

Today VX-770 is approved for human use by the US Food and Drug Administration for patients with Cystic Fibrosis.  That makes this research all the more real for Celiac’s like me (and you?).