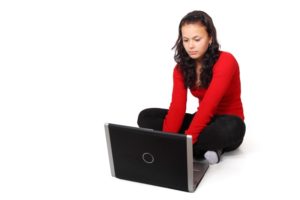 My name is Darla Matthews, I live in Calgary, Alberta, Canada and I was just diagnosed with Celiac Disease.  Well, that is not quite accurate.  In fact I was diagnosed in 2009 but only told about it in August 2018.  Here is my story.

When I was little I used to get really serious stomach pain; it was so bad I felt like passing out. My parents diligently took me to see all kinds of doctors all kinds of specialists. I was poked and prodded all by many specialists but nothing much came of it.

The only real diagnosis I received was call intestinal migraines which if you know anything about migraines pretty much means it hurts a lot and they really don’t know what causes it so this was not too much of a help.

One of the specialists I saw in 2009 what is a children’s gastroenterologist When I was just 7 years old. That specialist thought I might have celiac disease so they said before usual blood work. The test results must have come back but neither I nor my family ever heard about it again.

About 2015 my stomach pains stopped and I had my first hemiplegic migraine. A hemiplegic migraine looks to outsiders in felt to me just like a stroke So the left side of my face my right arm In my left leg all went numb and I couldn’t move them… yeah… so that was terrifying for me and my family.

I was just sitting down watching a movie with my family getting pizza so after a few minutes of panic my mom called an ambulance and I was rushed to the Calgary Children’s Hospital. Fortunately, by the time I got to the hospital most of the symptoms of worn off but I was exhausted and scared.

From then on I had can you please get migraines once in the fall and once in the spring and everybody seems to think that it was related to stress from school but it sure didn’t feel that way to me.

By this point I’ve been assigned specialists at the hospital and I was prescribed some very dangerous and powerful drugs that I was supposed to self medicate with when I needed. After trying different combinations I found that if I took the maximum dose of all of these drugs and got to bed with in about 20 minutes I could sleep for 24 hours and avoid the killer headaches. If I didn’t take the right combination with the maximum dose and get to bed sure enough I would be off to the hospital for another unpleasant IV.

It seemed I settled into a pattern that I could live with but it all changed in the first half of 2018 when I had 6 hemiplegic migraines.

I was also greatly concerned with my hair falling out so while I was at no risk of going bald my parents took me to see yet another specialist. That specialist started our conversation by saying he had reviewed my file and wanted to know how I as handling my celiac disease. My WHAT? Celiac?!? WHAT!?!

We asked him to clarify what are you talking about and the doctor told me that my chart showed that I had failed celiac disease test in 2009. Blood tests can be wrong so the doctor ordered another 3 tests which I took immediately and days later was told that I have failed the all.

At this point it was pretty clear I had celiac disease and that was most likely we had caused my hair to fallout my extremely light coloured skin and my killer migraines. However given help badly this whole thing advent botched I didn’t want to rely on anything other than the best diagnostic possible and that is getting the scope.

I was fast tracked into surgery after a delay of only a month And the surgeon came out well I was still knock out and told my parents but I was a textbook case. I had celiac disease and I most likely had it my entire life.

That was just a few weeks ago and from the day I left the hospital I went gluten free.

This website is something I started to help other young people and to give myself a diary of useful celiac disease related tips.

I hope this site helps you.